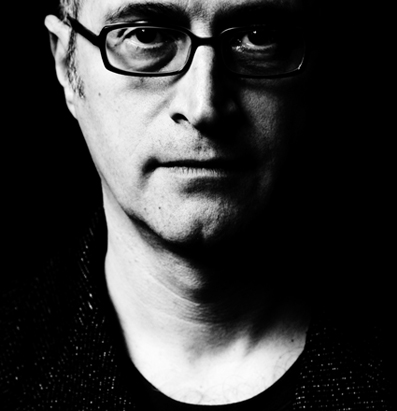 Eric was born in Aix-en-Provence, south of France, in 1962.
He started to learn music and painting at the age of nine through Martenot artistic education method. He initially focused his activities on music, starting with classic then shifting to rock and underground, before moving back to visual arts toward the end of the 80’s. After advanced studies in mathematics and economy, Eric started a carrier in international finance, while pursuing his artistic activities.

He has made numerous exhibitions in Tokyo where he was living until 2002 as president of an American financial firm. In December 2003 his work was presented at Senza Frontiere international biennale art exhibition in Kawasaki, and since then, his work is regularly shown at museum, galleries and contemporary art events around the world.

In November 2007 his video work Swimming Fluo was presented at Shanghai Museum for Contemporary Art (MOCA), as well as most contemporary art museum around China, at the occasion of Sport in Art exhibition sponsored by Beijing 2008 Olympic Committee. In 2009, he created two multimedia installations successively for Yves Klein Archives in Paris, and for the Museum of Modern Art and Contemporary Art (MAMAC) in Nice.

Since 2011 his large scale permanent lighting installation Les Moulins de Lumière is visible every evening until midnight in the skyline north of Paris on the neo-industrial site called “Les Grands Moulins de Pantin”. His monumental monochrome of light Fluo Blue has entered in 2011 the permanent collection of the Museum of Modern Art and Contemporary Art in Nice. His neon work la lumiere parle was exhibited in 2012 at La Maison Rouge Fondation in Paris. In 2013 his exhibition Passeur de Lumière offered a dialogue with Le Corbusier’s architecture at La Tourette convent near Lyon and in 2014 he was invited to create a monumental lighting installation to surround Yves Klein’s Monotone-Silence Symphony at the Philharmony in Luxembourg.

Since 2016 his monumental work Platonium was presented in Lyon, Bruxelles, Quito, Metz and for Nuit Blanche in Paris.

This year he was invited for a solo exhibition La Lumière Parle (The Light Speaks) at 836M gallery in San Francisco.

Following a path opened by Yves Klein, James Turrell and Dan Flavin, his work, and particularly his fluorescent neon installations and videos, creates a vibrating space, in search for immateriality.

I am in love with light.
It is the most favoured medium of my sensitivity, of my work.
It flows in our lives, it irrigates our universe
It opens the door.
Light has this unique feature, to be both corpuscular and undulatory in nature, both material and immaterial.
And for me, the artist shall be a boatman, precisely from the material toward the immaterial, from the real toward the imaginary, toward pure sensitivity.
What a better vector than light to achieve this goal ?
Light as medium then, but why not as a finality ?
Did I really choose light ? Didn’t it impose itself upon me ?
Light talks.
I hear it,
Sometimes.